Jochen Schneider, on Saturday afternoon, addressed the media for the first time since being hired as the New York Red Bulls’ head of sport on June 10. The German’s first days on-site in the Tri-State didn’t exactly serve up a happy first impression, though.

“The timing of my arrival could have been a little bit better. I arrived exactly the day after the disappointing loss in the Open Cup semifinal in Orlando [on July 27],” Schneider told reporters at Red Bull Arena in the hours leading up to RBNY’s 1-1 home draw vs. FC Cincinnati. “Then we had another, I would call it a sloppy performance against Colorado [a 5-4 home loss]. It was not the easiest beginning here and heads were down.

“But I could immediately feel that we have a great group of players, an amazing coaching team. They all worked together to get out of this situation and I could feel immediately that there is a fantastic energy in our facility, that there is a great connection between the coaching team staff and players. … In every long season there’s a period where you’re struggling a little bit. Hopefully we have this now behind us in the last three weeks.”

Offering warm praise for head coach Gerhard Struber, who he’s known since the dawn of Struber’s coaching career in Austria, Schneider believes last week’s valuable 2-1 road win in Atlanta stabilized RBNY’s summer swoon. He maintained, in the face of several probing questions about the club’s direction, that he can help the Red Bulls secure the MLS Cup title that has eluded them and their previous incarnation (the MetroStars) since the league’s dawn in 1996. 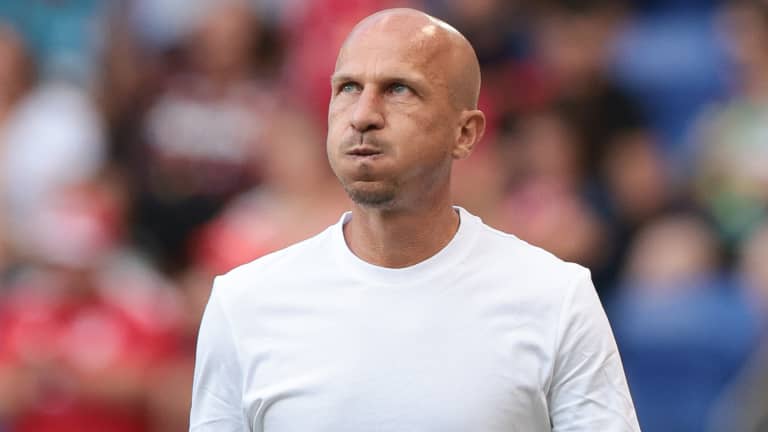 “The goal is to win trophies. There is this chance in this league,” said Schneider, who replaces now-Everton director of football Kevin Thelwell. “We have to find the right triggers.

“This is what this sport is about, especially in this league, where all the teams are so close together, not like in Germany, where you can say already today who will win the league. So this is amazing and therefore I’m happy to be here and to help the club to grow,” he added, making sure to declare that “we are not a farm team,” in reference to RBNY’s relationship with RB Leipzig (Germany), RB Salzburg (Austria) and the other clubs in their global network.

Schneider’s previous post was at star-crossed German giants Schalke 04. But he’s quite familiar with the Red Bull ecosystem, having worked under Ralf Rangnick and others for several years in multiple “energy-drink soccer” outposts. Notably, he acknowledged that RBNY’s scouting department needs investment and personnel, including on the youth side as they hunt talent for one of the more ambitious academy operations in MLS.

He’s now in charge of the long-term direction of a side currently sitting fourth in the Eastern Conference standings with 41 points from 27 matches, pursuing a home Audi MLS Cup Playoffs game and a deeper postseason run after a frustrating string of Round One exits over the past three years.

While cautioning that “my onboarding process is not over yet,” Schneider pledged to do what is necessary to nudge the club over the top.

“We especially count on young players, high-potential players. That does not mean that I would rule out to sign one or two experienced players in the future,” he said. “At Stuttgart, we signed in 2006 the 29-year-old Mexican Pavel Pardo. One year later we have won the Bundesliga and I can tell you it was exactly because of him. I mean, there were other players on the pitch as well – he was not alone – but he was the key which we needed to be successful, because he was a leader on the pitch, off the pitch.

“That was the right piece in our puzzle, so I wouldn’t rule that out. But mainly we focus on high potentials. This is the Red Bull way.”

RBNY’s summer transfer business was modest, bringing in fullback Kyle Duncan and forward Elias Manoel on loan and picking up former Houston Dynamo FC winger Tyler Pasher on waivers, and they continue to field some of the youngest lineups in the league.

Schneider hinted that there’s nonetheless enough quality for them to make a run this fall.