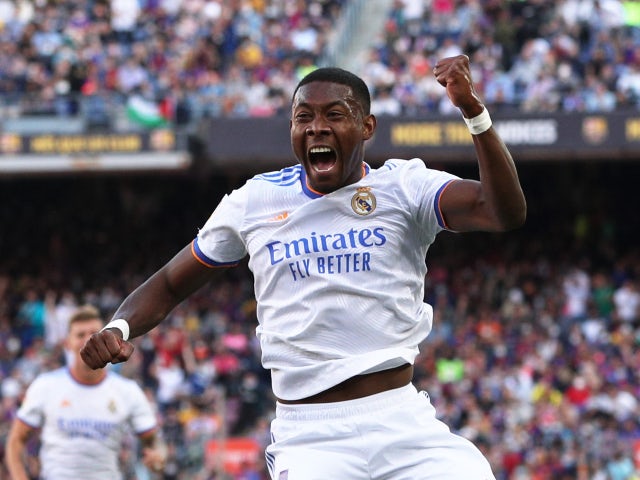 Real Madrid boss Carlo Ancelotti has named his squad for the 2022 Champions League final, with Gareth Bale and David Alaba both included for the La Liga champions.

There are no notable absentees for Los Blancos, with the capital giants having no suspension issues, while they have been able to recover those that have been injured in recent weeks.

Alaba has been a vital player for Real Madrid during the 2021-22 campaign, making 45 appearances in all competitions, contributing three goals and four assists in the process.

The Austria international has struggled with an adductor problem in recent weeks, though, missing his side’s last five league matches of the campaign, in addition to the second leg of their Champions League semi-final with Manchester City at Bernabeu.

Alaba has been back in training ahead of the final, and the 29-year-old is widely expected to line up in the middle of the defence alongside Eder Militao.

Bale will also make the trip to Paris, with the Wales international recovering from a back problem which forced him to miss the end of the La Liga campaign.

The 32-year-old has only made seven appearances for Los Blancos this season but could have a part to play ahead of leaving the Spanish giants on a free transfer this summer.

The match could also be Marcelo‘s final game for the club, as the experienced defender only has a contract with the capital outfit until the end of June.

Isco, meanwhile, is definitely leaving at the end of his contract, with the Spanish playmaker struggling for appearances during the 2021-22 campaign.

Eden Hazard has also recovered from a leg operation in recent weeks, making his return in the 1-1 draw with Cadiz in the middle of May.

The Belgium international has said that he is determined to make his mark in the Champions League final, as he bids to make up for lost time at Bernabeu.

“The coach knows that I still have two years here,” Hazard told Het Laatste Nieuws. “The first three years have not gone well. I want to show everyone what I can do. I am focusing on Saturday – the Champions League final against Liverpool – and continue my preparation for the season that’s coming.”

Thibaut Courtois is a certainty between the sticks, while Dani Carvajal and Ferland Mendy are expected to start in the full-back positions, with Luka Modric, Casemiro and Toni Kroos in midfield.

Federico Valverde is also set to start in an advanced area, while Karim Benzema and Vinicius Junior are certainties to feature in the final third of the field.

Benzema has scored 44 goals and registered 15 assists in 45 appearances for Los Blancos this season, while Vinicius has scored 21 goals and provided 20 assists in 51 outings in all competitions.

Marco Asensio, Luka Jovic and Mariano Diaz are also options in the final third, while Rodrygo will be hoping to play a big part, having scored five times and registered two assists in 10 European outings this term.