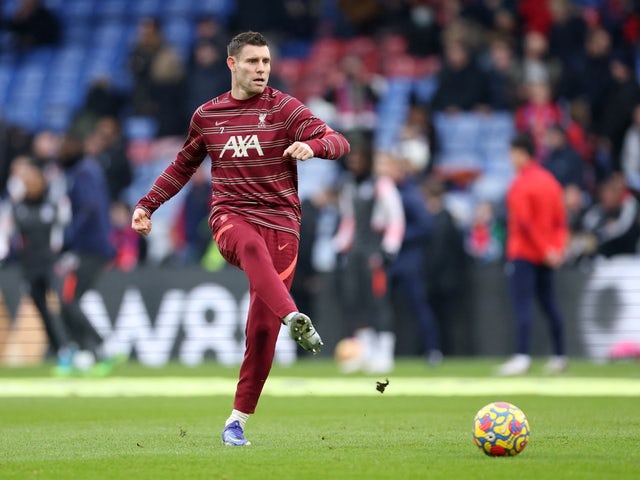 Liverpool midfielder James Milner has reportedly agreed to a new one-year deal at the club until the summer of 2023.

The 36-year-old’s game time from the first whistle was restricted in the 2021-22 campaign, and he is currently due to leave the club on a free transfer at the end of the month.

Milner still made a total of 39 appearances in all competitions for Jurgen Klopp‘s side last term, registering three assists and winning the EFL Cup and FA Cup in the process.

Twenty-four of Milner’s outings came in the Premier League, but he only started nine of them as Fabinho, Thiago Alcantara, Jordan Henderson and Naby Keita were all preferred in the middle of the park.

Despite his advancing years, Klopp is understood to highly value Milner’s on-field and off-field contributions and has been determined to keep him around for a little while longer.

According to The Athletic, Milner – who recently awarded an MBE for services to football and charity – and Liverpool have now agreed to a new one-year deal on Merseyside.

The report adds that Milner has accepted a “significant” pay cut to extend his stay at Anfield and even turned down a trio of offers from the Premier League and MLS which would have pocketed him more money.

Klopp is said to have personally informed the Reds hierarchy that keeping Milner was “essential” for Liverpool’s chances of silverware moving forward, and the Englishman’s new deal should be confirmed at some point this week.

Milner’s extension will see him spend over 20 years in the Premier League since his debut for Leeds United as a 16-year-old in 2002, and he previously described Liverpool as an “incredible place” to further his career during an interview with Alan Shearer last month.

“Yeah, when I come to make that decision it will be incredibly hard,” Milner told Shearer for The Athletic when asked about a potential new contract.

“Liverpool is an incredible place to play football and we have a great bunch of guys, but that is the point isn’t it, to play football? I just want to contribute. If I feel like I’m not contributing enough and I’m a passenger for the guys then it’s not really worth it.

“But I haven’t got into it, to be honest. It sounds like I’m batting you off, but there are so many games and it’s such a big thing to think about I just couldn’t do it now and still be doing my bit for the team, in training and in the dressing room. You’ve got to be fully here in the moment. The club have been great. We’ve said we’ll talk at the end of the season and work it out.”

The 61-cap England international has now made 289 appearances for Liverpool since arriving from Manchester City in the summer of 2015, scoring 26 goals and setting up 44 more.