Jurgen Klopp compares Liverpool team to “Ferraris in the garage” 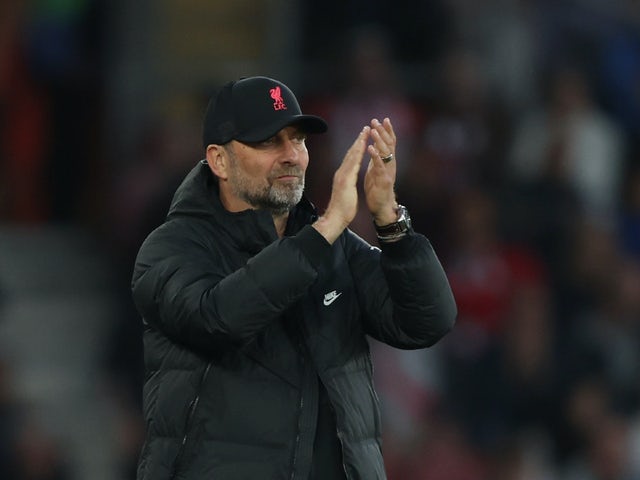 Liverpool manager Jurgen Klopp has likened his team to “Ferraris in the garage” following Tuesday’s crucial 2-1 win over Southampton in the Premier League.

Only Alisson Becker and Ibrahima Konate held their spots in the XI, with Klopp making significant alterations in all areas of the pitch following the FA Cup final win over Chelsea.

The Reds went 1-0 down to a deflected Nathan Redmond effort on the night, but former Saints loanee Takumi Minamino finished at the near post to restore parity for the title hopefuls.

With 67 minutes on the clock, Joel Matip‘s instinctive header won the tie for Liverpool, who needed to avoid defeat at St Mary’s to keep the Premier League title race alive until the final day.

Kostas Tsimikas, Curtis Jones and Harvey Elliott were among those to have also been handed opportunities on the night, and Klopp could not stop singing the praises of his second-string players.

“Top game, unbelievable performance, nine changes. It worked out because of the players. If it hadn’t worked out it 1000% would have been my responsibility,” Klopp told BBC Sport.

“It’s like having Ferraris in the garage! I couldn’t be more proud tonight. Players who haven’t played for weeks or months playing like they did tonight. It’s exceptional.

“I saw a sensational performances without rhythm. The mentality after being 1-0 down in a situation I think we agree could have been a free kick. We were all a bit outraged but the boys calmed down.

“We scored a wonderful goal, we were never out of the game but it was open again. Second half we kept going, had spells where we didn’t control the ball well enough then scored to make it 2-1 and then it was normal.”

Klopp also issued a reassuring update on Joe Gomez‘s condition after the defender was forced off early, sparking fears over another long-term injury layoff.

With Trent Alexander-Arnold handed a complete rest, Gomez was one of the nine changes Liverpool made for the St Mary’s encounter after 120 minutes of FA Cup final action.

However, on the stroke of half time, the 24-year-old went down with an apparent ankle problem, but he was able to drag himself to his feet before hobbling down the tunnel at the break.

Klopp did not deem Gomez fit enough to continue on the South Coast, and Jordan Henderson was brought on in his place, but the Reds boss is hopeful that the Englishman has avoided another serious injury.

“I hope we were lucky. Joe has pain but not too much. It was a shock to the system but when I spoke to him in the dressing room he was in a good mood,” Klopp added.

Liverpool remain one point behind Manchester City in the table ahead of their final-day clash with Wolverhampton Wanderers at Anfield, while the champions welcome Steven Gerrard‘s Aston Villa to the Etihad.