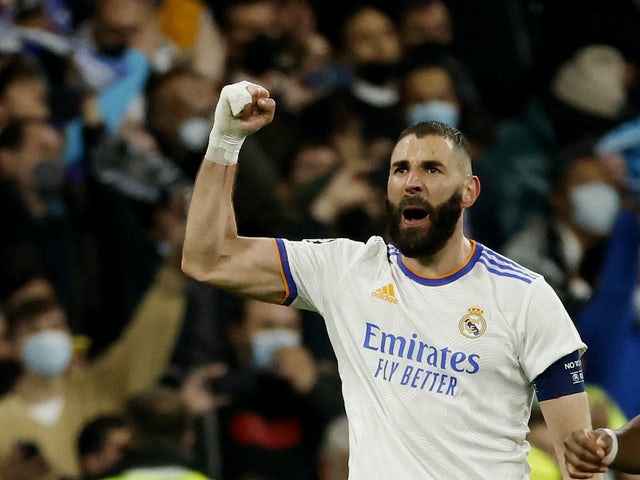 Karim Benzema will be bidding to break Cristiano Ronaldo‘s goalscoring record for a single Champions League season when he turns out for Real Madrid against Liverpool in Saturday’s final.

Benzema scored five times in the group stage of the competition, drawing a blank against Inter Milan in the middle of September before registering against Sheriff Tiraspol and Shakhtar Donetsk in four straight games.

The France international then scored back-to-back hat-tricks against Paris Saint-Germain and Chelsea in the last-16 stage and quarter-finals of the competition.

Benzema also scored three times over the two legs of their semi-final with Manchester City, making it 10 goals in his last five appearances in the Champions League.

The forward also needs just one goal to become the outright third-highest goalscorer in the history of the European Cup, as he is currently level with Robert Lewandowski on 86.

Ronaldo is the highest goalscorer in the history of the competition, finding the back of the net on 140 occasions during his time with Man United, Real Madrid and Juventus.

Meanwhile, Lionel Messi is second in the standings, having struck 125 goals in the tournament, 120 of which came during his time at Barcelona before managing five for Paris Saint-Germain since his arrival last summer.

Benzema has been in excellent form for Real Madrid during the 2021-22 campaign, scoring 44 goals and registering 15 assists in 45 appearances in all competitions.

The Frenchman was also key to his team’s La Liga title success, scoring 27 goals and registering 12 assists in 32 appearances, with Carlo Ancelotti‘s side winning the title at the end of April.

Benzema would also become the second-oldest player to score in a Champions League final if he were to find the back of the net against Liverpool after Paolo Maldini, who netted for AC Milan against Liverpool in 2005.

Real Madrid topped Group D in this season’s Champions League with 15 points, having won five and lost one of their six matches, scoring 14 times and conceding just three in the process.

The capital giants then overcame Paris Saint-Germain in the round of 16 before beating Premier League teams Chelsea and Manchester City in the quarter-finals and semi-finals respectively.

Real Madrid boss Ancelotti, meanwhile, will be bidding to become the first manager to lift the Champions League on four separate occasions when his team take on Liverpool in Paris.