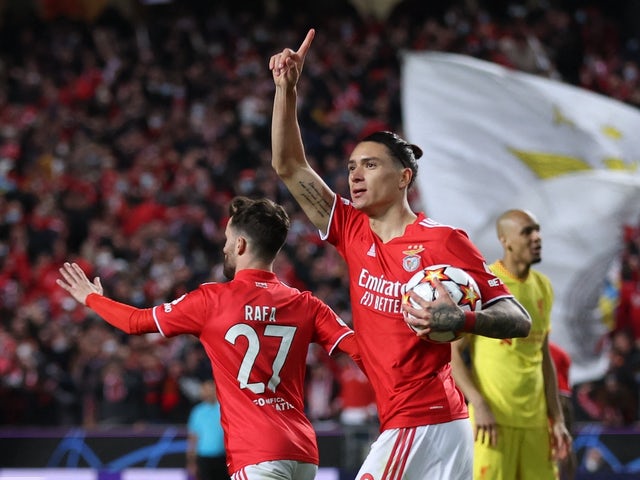 Liverpool have reportedly agreed to sign Darwin Nunez from Benfica in a deal that could reach up to €100m (£85.6m).

The Uruguay international has been on the radar of numerous top clubs across Europe after ending the 2021-22 season as the Primeira Liga’s top goalscorer with 26 strikes.

Nunez also found the back of the net six times in 10 Champions League appearances, including two goals in two games against Liverpool in Benfica’s quarter-final defeat.

The 22-year-old has been expected to command a high figure this summer, with his Benfica deal not due to expire until 2025, and Manchester United have long been credited with an interest in the striker.

However, the Red Devils’ failure to qualify for the Champions League is believed to have put Nunez off a move to Old Trafford, and it is a similar story with Newcastle United.

Reports earlier this week claimed that Liverpool were set to step up their interest in Nunez, who is said to have agreed personal terms with the Merseyside giants.

Now, Portuguese outlet Record – via Anfield Watch – states that Liverpool have now reached a total agreement with Benfica for the transfer of Nunez and could end up forking out as much as €100m (£86m).

Nunez is poised to sign a five-year deal at Anfield until the summer of 2027, and he would become the most expensive signing in Liverpool’s history should the Reds end up paying the full sum.

Virgil van Dijk‘s £76.2m move from Southampton currently holds that record, and Nunez would also become the most expensive Uruguayan player of all time – surpassing the £65m that Barcelona paid for Luis Suarez in 2014.

Nunez cost Benfica £21.6m to sign from Almeria in the summer of 2020, and the striker has gone on to register 47 goals and 16 assists in 84 games for the Portuguese giants in all competitions.

The 11-cap Uruguay international has scored two goals for his country and is seemingly prepared to arrive at Liverpool after the club confirmed the departure of Divock Origi as a free agent.

Mohamed Salah will stay for at least another 12 months, but the future of Sadio Mane – who is out of contract in 2023 – is still being called into question amid interest from Bayern Munich.

Bayern’s second offer for Mane would have supposedly only reached £30m if the Senegal international won three successive Ballon d’Ors, and Liverpool rejected the ‘laughable’ bid from the German champions.

Origi is one of seven players to be departing Liverpool upon the expiration of their contracts, with the Reds submitting their retained list for the 2022-23 season on Thursday.