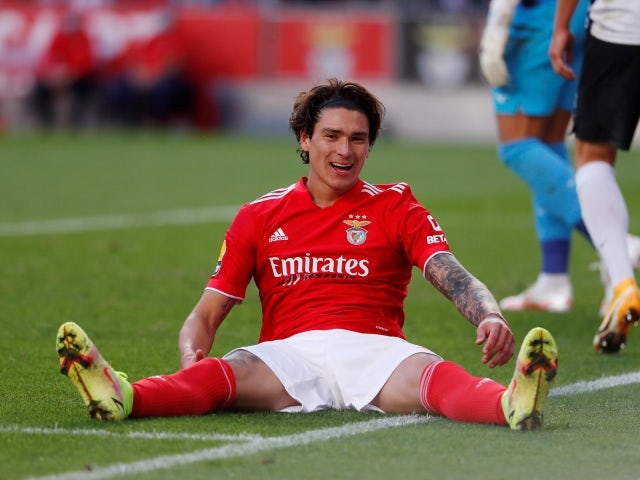 Liverpool have confirmed the signing of Uruguayan striker Darwin Nunez from Benfica.

Nunez will wear the number 27 shirt at Liverpool, which will become vacant once current striker Divock Origi completes his exit on a free transfer at the end of the month.

The former Penarol and Almeria youngster was thought to have been on the radar of Manchester United, Paris Saint-Germain and Newcastle United, but he is convinced that his style of play suits Jurgen Klopp‘s side.

“I’m really happy and delighted to be here at Liverpool. It’s a massive club. I’d like to thank my partner and my parents and my son, who is a real source of pride for me,” Nunez told liverpoolfc.com.

“They’ve been really important to me in the stages in my career. I’m really proud of them, and for the work we do, me and my partner, as a team and I’m grateful to her that I’m here.

“As I say, I’ve watched quite a lot and it’s a very big club and I hope I can give everything that I’ve got in order to help the team.”

During the 2021-22 season, Nunez amassed 34 goals in 41 games across all competitions for Benfica and won the Primeira Liga Golden Boot with 26 strikes in 28 top-flight appearances.

The Uruguay international also struck six times in 10 Champions League outings for the Portuguese giants to help them reach the quarter-finals, where they were eliminated by Liverpool as Nunez bagged a goal in both legs.

Nunez won the 2018 Uruguayan top-flight title with Penarol but leaves Benfica without a major honour to his name, and he is keen to win a wealth of silverware during his time at Anfield.

“When I arrived at the training ground, I was really surprised to see the set-up and the structure and all the trophies here,” the striker added.

“You can then imagine yourself winning more trophies and then later on when you come here again and see the trophies on display, you can say, ‘Look, I was a part of that, I was there at that time, winning trophies.’

“That’s one of the reasons why I came here to Liverpool – to win trophies and titles. I want to win a lot of trophies at Liverpool.”

Nunez leaves Benfica after recording 47 goals and 16 assists in 84 matches for the club since 2020, while he has two goals to his name from 11 appearances for the Uruguay national team.

The South American has become Liverpool’s second signing of the summer window after the Reds sealed a deal for Fulham starlet Fabio Carvalho last month.