Liverpool ‘willing to use Takumi Minamino in Raphinha deal’ 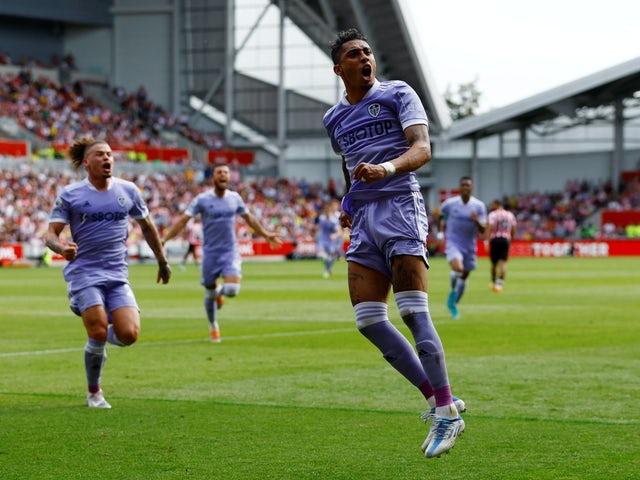 Liverpool have reportedly joined the race for Leeds United attacker Raphinha and are willing to use Takumi Minamino as a makeweight in a deal for the Brazil international.

Raphinha’s 11 goals and three appearances in 35 Premier League outings helped the Whites secure survival by the skin of their teeth, with the attacker crucially netting in a final-day victory over Brentford.

An exit clause of £25m would supposedly have been activated if Jesse Marsch‘s side dropped down to the second tier, but the Whites are now able to negotiate a reasonable fee for the 25-year-old.

Leeds forked out £16.7m to bring Raphinha to Elland Road from Rennes in the summer of 2020, but interested parties will most likely have to offer at least £60m to prise the attacker away from the club ahead of next season.

Barcelona, Manchester United and Arsenal have all been credited with an interest in Raphinha, who has struck a total of 17 goals and 12 assists in 67 appearances for Leeds in all tournaments.

Now, The Mirror claims that Liverpool boss Jurgen Klopp is a “big fan” of Raphinha and is keen to bring the South American winger to Merseyside in an attacking shake-up.

The Reds will have Mohamed Salah on the books for at least one more season, but they have seemingly resigned themselves to losing Sadio Mane amid interest from Bayern Munich.

Mane recently claimed that he would “do what Senegalese people want” after fans overwhelmingly voted for the attacker to leave Liverpool in a social media poll, although he has since insisted that he was joking with the comments.

Nevertheless, Mane has supposedly still decided that he wants to end his time at Liverpool this summer, and Barcelona’s long-running financial problems could hand Liverpool the advantage in the race for Raphinha.

The 25-year-old was in no mood to speculate over his future while on international duty with Brazil, though, telling reporters: “I have a contract with Leeds until 2024, so my future is in the hands of Deco and Leeds.

“My mind is on the national team, on the upcoming matches and on my holidays. I have a contract with Leeds and this issue will have to be discussed with my agent. When something happens, he’ll tell me.”

With Leeds demanding a hefty figure for Raphinha’s sale, Liverpool are said to be willing to sacrifice Minamino as part of a deal, and Leeds would happily welcome the Japan international to Elland Road.

Liverpool paid Red Bull Salzburg £7.7m for the services of Minamino in 2020, but the 27-year-old has struggled for regular starts at Anfield over the likes of Salah, Mane and Luis Diaz.

Minamino has managed 14 goals and three assists in 55 outings for the Reds since his arrival, with 10 of those strikes coming in 24 appearances during the 2021-22 campaign.

However, the attacker’s only start in the top flight last term came in May’s 2-1 win at Southampton in the penultimate gameweek of the season, and he was left out of the squad on 11 occasions.