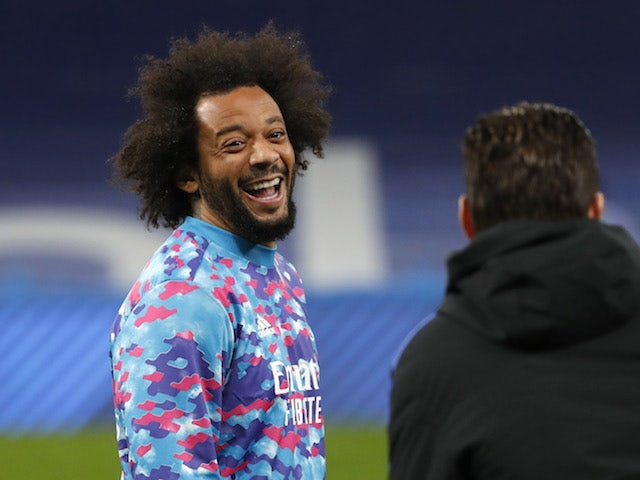 Marcelo offered no indication whether he would be signing a new contract at Real Madrid when questioned on his future ahead of Saturday’s Champions League final.

While Courtois has a long-term future at Bernabeu, still having more than four years left to run on his contract, Marcelo’s deal with the La Liga champions is due to expire at the end of June.

There has been a host of speculation surrounding the left-back’s future in recent months, with suggestions that Los Blancos are preparing to let him leave on a free transfer.

The 34-year-old is no longer first choice at the club due to the presence of Ferland Mendy, and he has only made 18 appearances in all competitions this term, contributing two assists.

Marcelo was asked about his future ahead of Saturday’s final, and the veteran defender was not prepared to indicate whether he would be remaining at the club.

“Everyone knows my love and passion for the club that I’ve spent almost all my career at,” Marcelo told reporters. “Fluminense set me up for my life in football and Real Madrid have given me everything too.

“I won’t say anything here, to avoid speculation, about whether I stay or not. Whatever happens, I think I’ve already done and given my all for Real Madrid. We’ll see after the final.”

Marcelo also discussed the importance of Saturday’s fixture, in addition to the fact that there would be a number of Brazilians taking to the field in Paris.

“We know how important this competition is and we’re having a great season,” Marcelo said. “We deserve to be in the final and we’re excited for it. It’s normal to have some nerves, but you already feel excited once the day of the final comes.

“It’s a matter of pride whenever we have Brazilians in the final. I tell the Brazilians who’ll watch the game to enjoy this final and the football.”

Marcelo was also keen to pay tribute to Real Madrid boss Ancelotti during the press conference, claiming that the Italian’s ability to manage a dressing room makes him a strong leader.

“As well as understanding football so well, he can also manage a dressing room really well,” Marcelo added. “We’ve had no problems in the dressing room over the course of this season. Even though every player wants to play, this is managed well by the coaching staff.”

The South American provided two assists in 12 La Liga appearances during the 2021-22 campaign, while he has only played three times in the Champions League this season.

Marcelo has made 546 appearances for Los Blancos since arriving from Fluminense in 2007, scoring 38 goals and providing 103 assists in the process.