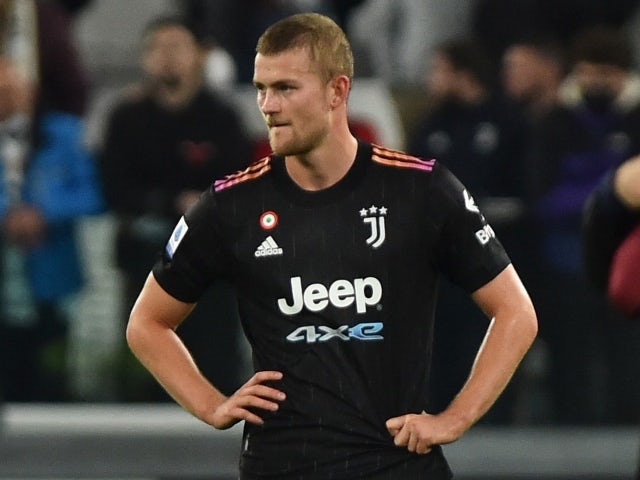 Juventus centre-back Matthijs de Ligt has refused to shut the door on a future move to either Manchester United or Liverpool.

The 22-year-old – who was represented by the late Mino Raiola – earned a £77m move to Turin after starring in Ajax’s run to the Champions League semi-finals in 2019.

De Ligt quickly became an integral part of the Old Lady’s defence and has already made 117 appearances for the club in all tournaments, scoring eight goals and setting up three more.

The centre-back’s 2021-22 season saw him make 42 appearances for Massimiliano Allegri‘s side, including 29 starts in Serie A, but he ended the season without a trophy to his name.

De Ligt remains under contract at the Allianz Stadium for another two years, but his future has been called into question amid interest from the Premier League.

When questioned on the possibility of a move away from Juve by NOS, De Ligt stopped short of verbally committing his future to the Italian giants as negotiations over a proposed new contract continue.

“Talks are being held and, when the time comes, I will decide whether I will extend or whether I want to look elsewhere,” De Ligt responded, as quoted by 90Min.

“I always look at what is best for myself in terms of sporting project. Fourth place, two years in a row, is not good enough. We will have to make steps in that direction. Personally, this was my best year so far. In terms of playing time and the way I played.

“The club have said that to me and I have shown this season, when Giorgio Chiellini and Leonardo Bonucci were injured, what I am capable of. I had to take the lead and it went well. I think that’s the next step.”

De Ligt has won one Serie A title, one Coppa Italia and one Supercoppa Italiana with Juventus so far, and the 35-cap Netherlands international is said to be admired by both Manchester United and Liverpool.

Raphael Varane arrived as a marquee signing from Real Madrid in 2021, but the World Cup winner’s performances came under criticism alongside Harry Maguire and Victor Lindelof.

Eric Bailly, Phil Jones and Axel Tuanzebe are all expected to leave the club this summer, potentially paving the way for De Ligt to reunite with Ten Hag at Man United, who are also rumoured to be closing in on a deal to sign Villarreal’s Pau Torres.

However, Juve are desperately attempting to renew De Ligt’s contract in Turin and have reportedly tabled two fresh offers to the centre-back in the hopes of warding off interest from England.