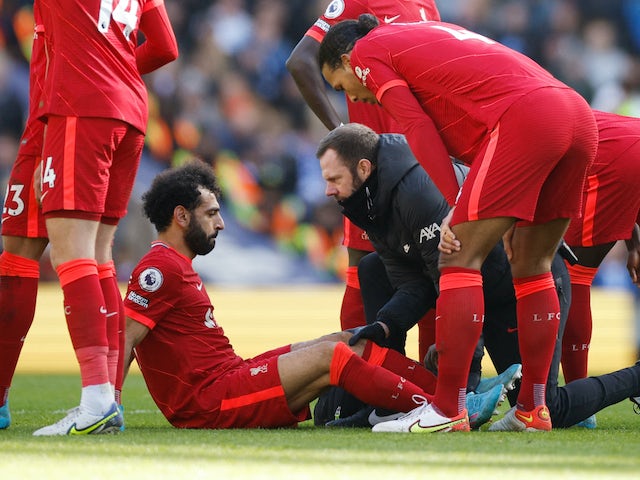 Mohamed Salah was reportedly absent from Liverpool training on Monday after picking up a foot injury in the weekend’s win over Brighton & Hove Albion.

The 29-year-old netted his 20th league goal of the season in a 2-0 win at the Amex – Liverpool’s 2,000th in the top flight – before sustaining the issue in the second half.

Jurgen Klopp claimed after the match that Salah downplayed the seriousness of the issue, with the Reds facing a journey to fourth-placed Arsenal on Wednesday evening.

However, the Liverpool Echo reports that Salah did not take part in training on Monday, putting his participation in the midweek contest into serious doubt.

On a positive note, the report adds that Ibrahima Konate returned after sitting out the Inter Milan and Brighton clashes due to a knock, with Roberto Firmino also back on the bench at the Amex.

Salah now has 28 goals and 10 assists to his name from 35 matches in all tournaments this season and has struck eight times in 12 previous meetings with Arsenal.