Pep Guardiola: ‘Manchester City or Liverpool can win the treble’ 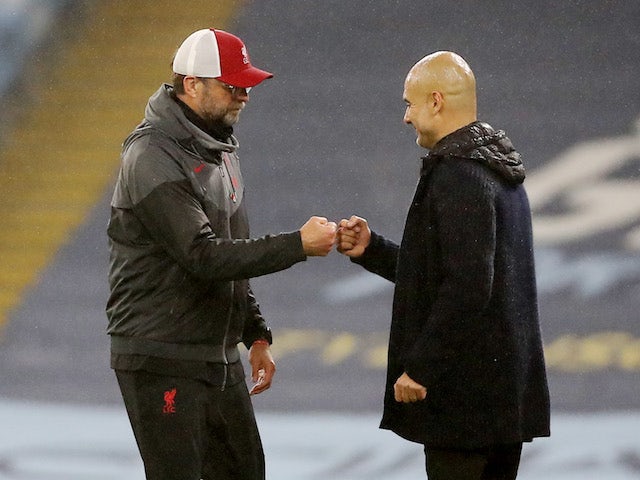 Pep Guardiola believes that his Manchester City side or Liverpool are capable of winning the treble this season.

The Citizens are currently top of the Premier League and are in the quarter-finals of both the Champions League and FA Cup, while Liverpool could actually win the quadruple, as they have already triumphed in the EFL Cup and remain in the hunt with City for the other three aforementioned trophies.

No English club has won the treble since Manchester United back in 1999 – who got their hands on the Premier League, the FA Cup and the Champions League – and although Guardiola has stressed that it will be difficult to replicate the Red Devils’ impressive feat, the Spaniard believes it is possible for his City team or Jurgen Klopp‘s Liverpool to win three major trophies this year.

Speaking to the press ahead of City’s FA Cup clash with Southampton on Sunday, Guardiola said: “If United did it once, someone else can do it. When you break a record or something, it is because someone has done it before.

“People said we could not win three domestic titles ever, it was impossible, and we did it. So when it happens, another team can do it. It would not be easy but you can do it, of course.

“In September, October, November, it is more difficult but when there are two months left and still you can be there to win the titles, yeah it’s possible. On the other hand, it’s happened once in a lifetime so that shows how difficult it is!”

City became the first English club to win the domestic treble in 2018-19, Guardiola’s third season at the helm, but they are yet to get their hands on the Champions League.

As for Liverpool, the one and only time they won the treble was back in 1983-84 when they celebrated success in the English top flight, the League Cup and the European Cup.