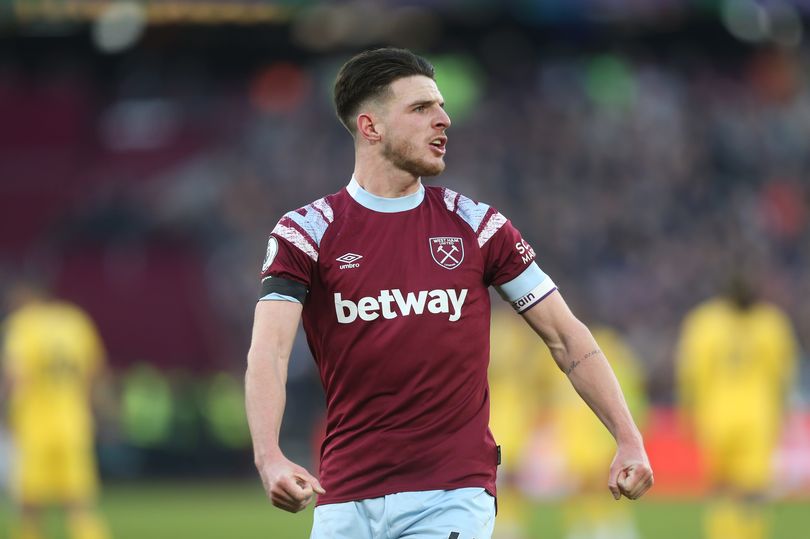 It seems likely that West Ham United midfielder Declan Rice will join a new club in the summer transfer window, with Arsenal, Chelsea, Manchester United and now Liverpool all heavily linked in recent times.Rice is now into the final 18 months of his contract at the London Stadium, making this summer the last chance for the Hammers to receive a large sum for their star player. The 24-year-old has rejected talks over a new deal multiple times, making it no secret of his desire to play in the UEFA Champions League sooner rather than later.For so long it seemed a foregone conclusion that the England international would be returning to Chelsea, where he spent his formative years before being released aged just 14, but recent reports have indicated that Arsenal could now be the favourites to sign him. So with that said, here's a look at the latest on the tough-tackling midfielder's future with West Ham.
Share

Declan Rice is a wanted man after becoming one of the Premier League’s best young midfielders following a sensational journey at West Ham United.

The England international was picked up by the Hammers after he was released by Chelsea as a 14-year-old, a decision that the Blues are now regretting almost a decade later.

Due to his rise through the ranks and his incredible performances for England in the summer, Rice has not only got the nation on his side, but the midfielder has also attracted interest from the Premier League’s biggest clubs.

And after clarifying his long-term plan, they’ll be hopeful that they can secure a future move, much to the disappointment of West Ham.

The 22-year-old has already rejected two extensions to stay with the London club, and the England international is keen on seeing whether interested clubs do make formal approaches to sign him.

Manchester United and Manchester City have been linked in various reports but Jones claims Chelsea are the likeliest to make a bid, with an offer expected to be lodged “later this month.”

Were bids not to materialise, though, Rice is expected to be open to signing a new deal with West Ham, but only if he is handed a salary commensurate with his transfer value. That would likely mean the Irons would have to break their wage structure to meet his demands and, at this stage, that isn’t a realistic possibility.