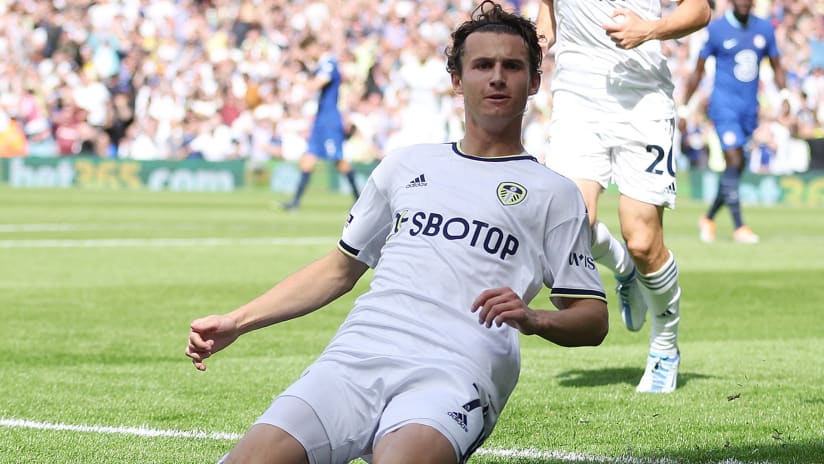 Marsch wasn’t surprised by the victory or his team’s hot start to the Premier League campaign.

“The good thing about today is we didn’t need luck,” Marsch told NBC Sports. “I think we really had a clear match plan, that the guys played really well, that we looked confident, that we played aggressive, but that we also played with discipline. I think we can use this. We can use this to continue to push us to get better.”

Aaronson got the scoring started – and marked his first Premier League goal – in the 33rd minute when pressuring Chelsea goalkeeper Édouard Mendy into a botched bit of dribbling in his own penalty area. The Union homegrown product joined Leeds from RB Salzburg this summer for a reported $30 million, reuniting with Marsch after their time together in Austria.

Harrison capped the scoring in the 69th minute when banging home a cross that Rodrigo cushioned with a header. The English winger, picked No. 1 overall by NYCFC in the 2016 MLS SuperDraft, has played for Leeds since 2018 and also whipped in the free kick on Rodrigo’s 37th-minute header that doubled Leeds’ advantage.

Leeds are in full control!

Meanwhile, Adams left his stamp all over the midfield battle and drew rave reviews from both American and British media members – earning some man-of-the-match calls. He joined Leeds this summer from Bundesliga side RB Leipzig for a reported $24 million transfer fee, reuniting with Marsch from his previous managerial stops in Germany and MLS.

Adams was MotM. Forget the on-the-ball stuff, and the stuff that happened. It’s the stuff that *didn’t* happen — i.e., Chelsea never got any sort of handle on the game through midfield, never were able to control tempo at all.

Adams was the biggest reason. https://t.co/HReTNBaFQ9

With Aaronson and Adams in fine form and Leeds soaring, USMNT fans will surely be overjoyed with the FIFA 2022 World Cup three months away. The Yanks will begin Group B play Nov. 21 against Wales.

Meanwhile, Pulisic has been linked with loan moves away from Chelsea, who finished Sunday’s contest with 10 men after Kalidou Koulibaly’s second-half red card. Reported destinations for the 23-year-old forward have ranged from Manchester United to AC Milan.

“It just goes to show people around the world that Americans can play football too,” Aaronson told NBC Sports after the match. “We’re out there and we’re playing ball and playing for a English Premier League team and we’re getting goals and assists. So, we’re out there and we’re doing well and on the coaching side, too. I think it’s only up and coming and there’s going to be more and more talent in the future making this trip over the pond. It’s a great start and it’s only going to get better.”