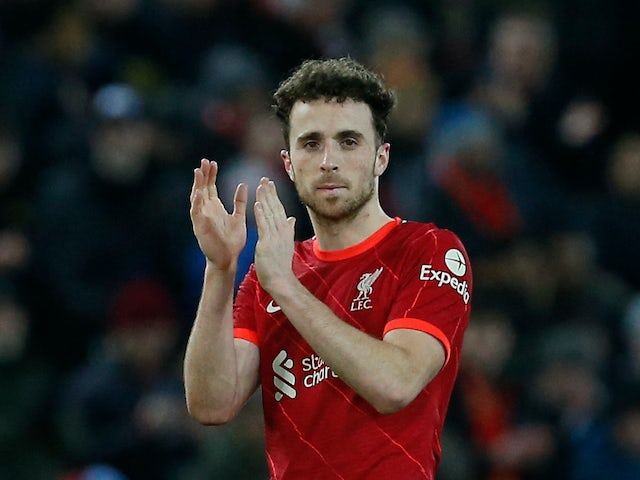 Liverpool attacker Diogo Jota is reportedly on course to recover from his ankle injury in time for the EFL Cup final with Chelsea on Sunday.

Prior to overseeing a 6-0 victory over the latter, Jurgen Klopp suggested that Jota – as well as Roberto Firmino – were fighting uphill battles to be fit for the final having not returned to team training.

However, the Daily Mail claims that Jota was back out on the grass on Wednesday, and those inside the club are ‘cautiously optimistic’ about the 25-year-old’s availability for Sunday.

The report adds that Jota is only likely to make the bench if he is deemed fit enough for a place in the squad, but Firmino’s adductor problem will render him unavailable.

As a result, Sadio Mane, Luis Diaz and Mohamed Salah could continue as Klopp’s front three at Wembley, where Caoimhin Kelleher will also start in goal over Alisson Becker.

Jota has 17 goals to his name from 32 appearances in all tournaments this season, and his double against Arsenal in the semi-finals sent Liverpool to Wembley after a 0-0 first-leg draw at Anfield.