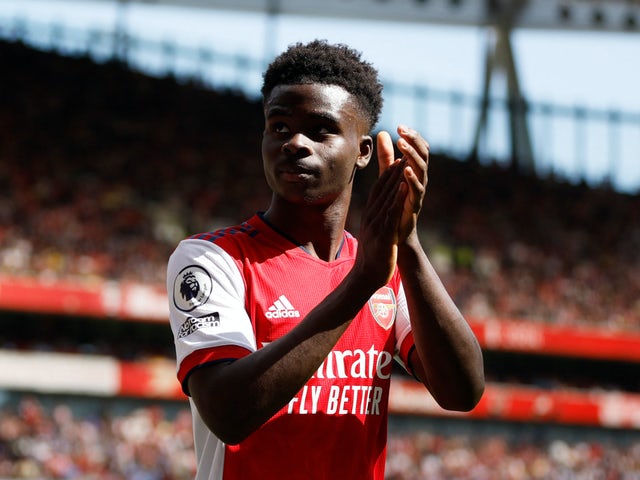 Manchester City have reportedly stepped up their interest in Arsenal attacker Bukayo Saka.

The 20-year-old ended the 2021-22 season as the Gunners’ top scorer in all competitions with 12 strikes, 11 of which came in 38 Premier League appearances.

Saka also set up seven goals in the English top flight during another impressive campaign with his boyhood club, who fell short in their attempts to qualify for the Champions League.

Saka remains under contract with Arsenal until the summer of 2024, and Mikel Arteta‘s side are expected to enter talks over a new contract with the England international soon.

However, there are fears that Saka could decide to end his stint in North London should the club repeatedly fail in their bid to return to Europe’s top competition in the coming years.

Saka could supposedly ask for a release clause to be inserted in any new contract he signs with Arsenal, and Liverpool have been linked with a move for the attacking starlet.

Premier League champions Man City have also been alerted to Saka’s situation, according to the Daily Mail, who claim that Pep Guardiola‘s side are closely monitoring future developments.

The report adds that City are not expected to pursue a move for the versatile Englishman in the upcoming transfer window, but optimism has grown over a future transfer following Arsenal’s fifth-placed finish in the top flight.

Saka has now made 131 senior appearances for Arsenal since coming through their Hale End academy, scoring 23 goals and setting up 29 more in the process.

The former Watford youngster has won the FA Cup and Community Shield during his time in North London, and he earned his 15th England cap off the bench in Saturday’s Nations League defeat to Hungary.

Man City have already bolstered their frontline with the acquisitions of Julian Alvarez and Erling Braut Haaland, but they are still being tipped to lose Gabriel Jesus in the upcoming window.

Arsenal are said to be leading the race for the 25-year-old, who could still cost in excess of £40m and has allegedly also been offered to Real Madrid and Atletico Madrid.

Riyad Mahrez‘s situation is also uncertain as he runs down the clock on his Man City deal which expires in 2023, and Raheem Sterling is thought to be contemplating a move away from the Etihad Stadium at the end of next season.

Meanwhile, Liverpool are being linked with Saka at a time where Sadio Mane has supposedly decided to leave the club amid firm interest from German champions Bayern Munich.

Liverpool are reported to have rejected an opening bid of £25m from Bayern for Mane, while they are also running the risk of losing Mohamed Salah on a free transfer in just over 12 months’ time.